Recently, Baofeng.com, the domestic videostream portal giant, whose Baofeng Xinying Technology Co., Ltd. reached a cooperation agreement on blockchain technology with Quantum Blockchain (short for Qtum). It is the world’s first signed BCN (Blockchain Consensus Network) service agreement. These two parties will conduct a series of cooperation in the deployment of full nodes in the blockchain network, the integration of blockchain and video industry, as well as the construction of blockchain-based open source community, so as to jointly promote the commercial success and technology development of China’s blockchain technology. Since its establishment in January 2007, Baofeng has been committed to providing Internet users with the easiest and most convenient Internet media player solution with video decoder and audio decoder technologies being the world’s leader. Currently, Baofeng lives up to the reputation of domestic video portal giant with the number of users more than 200 million. Since its listing in March 2015, the total market capitalization of Baofeng Group has exceeded 8 billion CNY. As a pioneer of Baofeng Group to enter the blockchain field, Baofeng BFC Boko Cloud launched by Baofeng Xinying Technology Co., Ltd. drew much attention with orders in advance of more than 500,000. Its BCN service is the world’s first and a help to the rapid deployment of full nodes in the area of blockchain business. 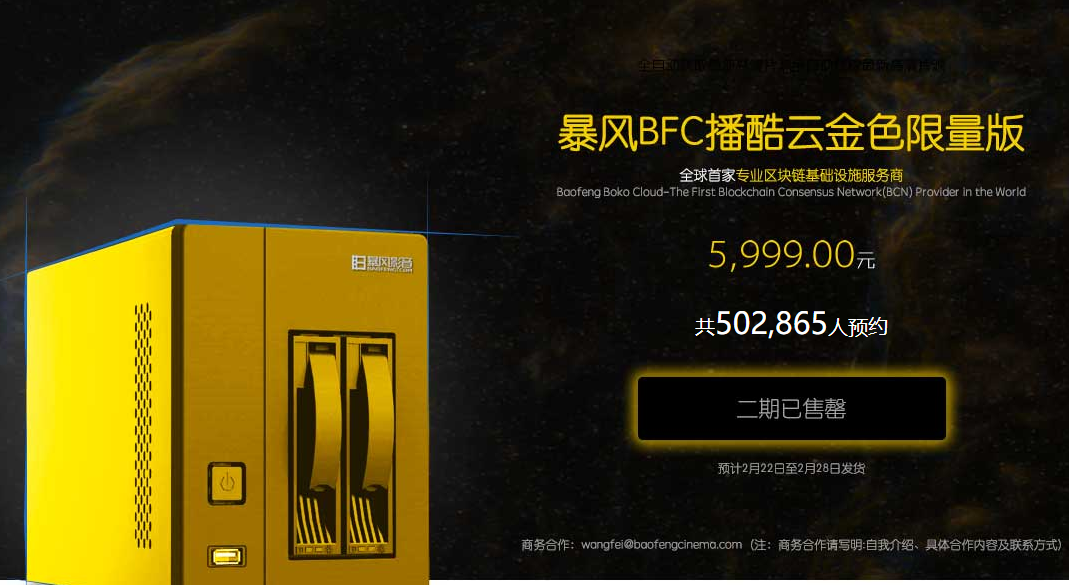 In the future, Baofeng BFC Boko Cloud hardware device will support Qtum to run more than 50,000 Qtum PoS full nodes. With a large number of Baofeng Boko Clouds becoming Qtum’s full node, Qtum will be built into a blockchain distributed network with the largest number of full nodes. At present, the Bitcoin network and Ethereum network have around 10,000 full nodes all over the world, therefore this move would enable Qtum to have the largest number of full nodes in the entire blockchain industry, which lay a well-grounded base for the later Qtum technology upgrades and iterations. Since Qtum is now a PoS (Proof of Stake) consensus mechanism, the network scalability of the late period will greatly outperform the existing POW network (as Bitcoin and Ethereum), laying a solid foundation for the commercial success of blockchain.

About why Qtum was chosen as the first blockchain technology partner of Baofeng, Cui explained,

Blockchain is actually based on P2P network, and Baofeng itself is engaged in building P2P platform, so we are more concerned about the architecture. Qtum, as the first PoS smart contract platform based on the UTXO model, its underlying security and base flexibility are extremely impressive. After communicating with its team, we realized that its current ecology is well developed and has over 50 distributed applications worldwide, with a total market capitalization of more than USD 4 billion. We are excited to partner with one of the best blockchain technology teams in this field and make joint effort to promote the development of value-featured internet in China.

In response to this cooperation, Qtum founder Shuai Chu said,

We are very glad to cooperate with Baofeng. It is the first time that a listed company cooperates with an outstanding blockchain open source community. Blockchain’s rapid developing signals a revolution in the social commerce model. The information-featured Internet has led the business model of the past 30 years. We believe a new model and wave of blockchain-technology-driven commerce will lead the next 30 years. It is still in the early stage of application of the blockchain industry, while we do believe that the value created by blockchain-based and value-featured Internet for the society will outweigh the value created by the Internet Era. And we are very happy to see this happening.

Big Hi there, this is Lylian, an editor with 8btc. Love all kinds of "money", interested in new stuff going on in the world. Get the latest chinese policies on Blockchain and cryptocurrency for u...